Do You Ever Have Really, Really Weird Dreams?

For as long as recorded history, and probably long before, people have been obsessed with dreams.

The ancient Greeks viewed them as visions from the gods.

The Greeks thought that they could tell the future.

The success of future battles.

The rise or fall of nations.

Freud thought that dreams provided an insight into our unconscious.

For Freud, dreams were the result of two processes.

First, was the unconscious “wish” behind the dream.

Second, was a type of censorship, that distorted the wish.

So, we dream of something that we want but are ashamed to have.

More recently, Dr. J. Allan Hobson, a psychiatrist and longtime sleep researcher at Harvard, argued that dreams are a sort of “exercise” for our brains.

Dreaming for the brain is warming its circuits, anticipating the sights, the sounds, and the emotions of waking.

But what about really, really weird dreams?

What do THEY mean?

To be honest, I have a super weird dream.

One that I haven’t shared with anyone, before today.

And, I know exactly what it means.

So, what do I dream about?

As far as the eye can see. 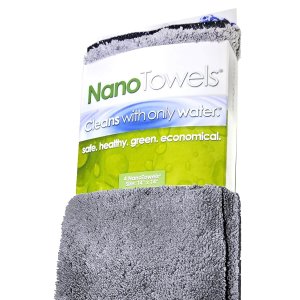 Nano Towels® clean with ZERO toxic chemicals that can make your family, friends, and pets sick, and harm the environment.

Nano Towels® also not only eliminate those expensive cleaning products, but also the need to purchase expensive paper towels.

That saves you money.

And saving money is something that everyone dreams about. 😉

– Brought to you by

Easter Eggs . . . All Over The Floor
Your Cellphone Is Dirtier Than A Toilet Seat

©1996-2020 Life Miracle Products, Inc. All Rights Reserved. All of the content and code on the whole of this website is copyrighted information. Using said data in whole or in part without the express written consent of this company is a violation of U.S. and international copyright laws. No part of this may be reprinted or used without the express written consent of Life Miracle Products, Inc. USA. All material provided on the lifenatural.com web site is provided for informational or educational purposes only and is not intended to replace any advice from your physician or other health care professional. Always seek the advice of your physician or other qualified health care provider with any questions you may have regarding a medical condition. You should not use the information on this website for diagnosis or treatment of any health problem or for prescription of any medication or other treatment. Consult with a healthcare professional before starting any diet, exercise or supplementation program, before taking any medication, or if you have or suspect you might have a health problem. Consult a physician regarding the applicability of any opinions or recommendations with respect to your symptoms or medical condition. *The statements in this website have not been evaluated by the Food and Drug Administration. The products herein are not intended to diagnose, treat, cure or prevent any disease. Results as depicted herein are not typical for all consumers. Individual results may vary. LifeMiracle®, Nano Towels®, Nanolon®, Permanent Paper Towel®, Cleans With Only Water®, LiquiVive®, NanoSponge®, LaundryPLUS® are registered trademarks. All rights reserved.